Skip to content
In my trainings, I’ve been using the Cynfin framework which was developed by Dave Snowden in 1999 while he was working for IBM, for a long time.
It really helps to describe the significant distinction between ordered and unorded – when a defined process works and when to use an empirical approach i.e Scrum. 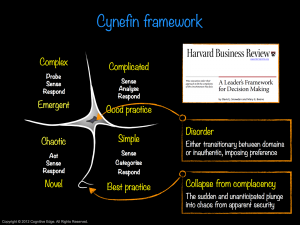 Snowden is a great speaker with lots of insights and british humor. However, each sentence counts and it is loaded with information and very technical terms. As of know I am still digesting his talk.

For exactly that reason, I decided to summarize my take aways and share it for you and myself:
If you don’t understand you cannot adapt – If it works just keep doing it; however what to do if it stops working. Then you are out of your depth and since you did not understand it in the first instance you cannot effectively cope with it
Cookbook – Everyone can cook with a cookbook given the right kitchen with the right tools and all ingredients are available. However, if you lack tools or ingredients you need a ‘chef’ someone who understand the theory and knows the practice. By that time the cookbook is useless to the novice.
Consciousness is a distributed function – the brain, nervous system, hormonal system, … all have an impact in how we work. Consciousness is what a knowledge worker works with.
Body of Knowledge – BoK requires theory and practice. You need the theory and 2-3 years of practice (nervous system) to acquire the skills. Apprenticeship and serving time is key. Theory and practice combined are called praxis. Praxis makes perfect.
Exaptation – using something for something else – far more successful then adaption. Exaptation requires granular elements for recombination. Adaption causes slow change; exaptation is a far more successful strategy for innovation.
Architecture in Software – needs to allow for exaptation. Fairly fine grained objects, good scaffolding allow for free interaction and combination. Software development is a service based provision.
Taking a linear process and drawing it as a circle doesn’t make it non-linear (ditto not faster) – Scrum-er-Fall
Coherence – not perfect data but usable, semantically meaningful. Often we have to make decisions on data which is coherent but not absolute.
People make decisions based on ingrained patterns on past experience – whatever data available, it will be filtered by past experiences.
Complex Adaptive Systems (CAS) cannot be eliminated – we have to manage the non-linear causal dependencies and resulting turbulence in unordered systems.
Meaning exists between the gaps of people, not the people themselves – it is the interaction what counts, the relationship between is more important then the things themselves. Don’t change the person, change the way they interact. Manage networks, the vague gaps between things
Agents are anything that reacts within/withon a system – people, ideas, groups, myth
In the Simple domain – agents are fully controlled
In the Chaos domain – no constraints on the agents, wisdom of the crowds; chaotic system have value but they are complicated to create
In the Complex domain – beneficial coherence through boundary management and attractors. We manage the emergence. (Emergence requires less resources then other processes). You can only understand it while interacting with it.
The Simple domain is adjacent to the Chaos domain – If an unordered problem is approached in a Simple fashion it  will transition straight to Chaos through an catastrophic event.
We like order, like to conform
The more bureaucracy the more informal networks in an enterprise
Hindsight doesn’t lead to foresight
Stupidity and Intelligence with Deception are the same thing.